Customer matched zone "Locations not covered by your other zones"
View cart “Clean & Clear Foaming Face Wash | 50ml” has been added to your cart.
Zoom 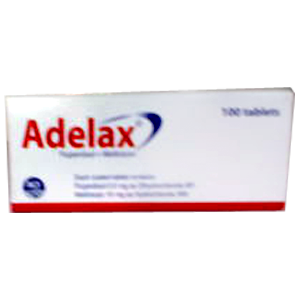 Melitracen is a tricyclic antidepressant. It blocks the neuronal re-uptake of both serotonin and nor-epinephrine in the central nervous system, there by minimizing the symptoms of depression.

Adults: Usually 2 tablets daily, in morning and afternoon. In severe cases, the morning dose may be increased to 2 tablets.

Elderly patients: 1 tablet in the morning.

Maintenance dose: Usually 1 tablet in the morning or as directed by the physician.

This preparation may enhance the response to alcohol, barbiturates and other CNS depressants. Simultaneous administrantion of MAO-inhibitors may cause hypertensive crisis.

It is contraindicated in the immediate recovery phase after myocardial infarction, defects in bundle-branch conduction, untreated narrow angle glaucoma and in acute alcohol, barbiturate & opioid intoxications. Not recommended for excitable patients since its activating effect may lead to exaggeration of these characteristics.

In the recommended doses, side effects are rare. These could be transient restlessness and insomnia.

The safety of this drug has not been established in pregnancy and lactation.

If previously the patient has been treated with tranquilizers with sedative effect these should be withdrawn gradually.

Keep in a dry place away from light and heat. Keep out of the reach of children.
Order on WhatsApp
Sku: 55604
Categories:Medicine and Consumer Items
Share:

There are no reviews yet.

We use cookies to ensure that we give you the best experience on our website. If you continue to use this site we will assume that you are happy with it.
Read more Accept
Shop Now? On whatsapp
Start a Conversation
Hi! Click one of our member below to chat on WhatsApp
The team typically replies in a few minutes.
Amar Pharma
Click to Order Online